Microsoft Flow (now renamed Power Automate probably because a bunch of other stuff in the world is named "Flow") has a lot of assumptions around JSON built into it.  The "Object" variable in Flow is actually only considered valid if it is valid JSON.  In truth, it should be referred to as a "JSON Object" for clarity.  To support this functionality it does some things behind the scenes that aren't expressly shown on-screen.

Ultimately, Flow automatically escapes out any String variable if you add it to a Flow Object variable.  So you don't have to do squat.  For the most part.  Read on.

"Escaping" strings is a common problem in various computer-based text formats.  The problem boils down to:  how do you handle if a value in your text document contains the same values you use to designate formatting?  If you've ever export/imported a CSV from Excel and run into the problem where a particular value happens to have a comma in it (e.g. city/state, Jr/Sr, names with apostrophes, etc.), then you immediately understand the problem.

JSON is simply a formatted text file.  Similar to a CSV, JSON uses certain characters to define where values begin/end.  Unlike CSV, commas are not the problem in JSON.  In JSON, the most common problem is with string values that include double quotes and/or backslashes and "escaping" them is done by precluding them with a backslash (i.e. \" or \\).


For example, if you take a particular string from SharePoint or other external source that could potentially include string items that need to be escaped, then you might assume you need to do some work on those values yourself to fix this.  However, Flow automatically escapes these for you when you include them in a the Set Variable | Object step.

So let's say you have a string value read in from "somewhere" that contains:

If we wanted to assign this value to a string inside a JSON object/document, then you'd need to escape the "'s and \'s by precluding them with a backslash.  Ultimately, we'd need the string to actually look like the following if we were going to assign it to a JSON string name/value pair:
What isn't immediately clear is that Microsoft Flow does this for you automatically.  You can see how this works in the following example Flow:
In this example, I just added the variable directly into this new Flow Object variable (again, which is always  a JSON object).  As a part of dropping a string variable into an Object, Flow automatically escapes any necessary characters (but doesn't tell you is doing that).

Therefore, while you might expect the above to fail, it actually results in:

So it took the basic string and went ahead and escaped it out for you.

I do appreciate Flow doing this on your behalf, but this is one of those scenarios when your own distrust of external data (a very correct way of viewing things) could cause you to overreact and cause more problems than you will solve.

Manually building can be cumbersome

If you tried to do the above instead manually by using the Expression Builder on the Set Variable step then you might not have much success.  For example if you tried the following it would fail:
The concat() string it would assemble (using the above example value for testString) would be:
When it should look like:

This means that you'd need to manually escape the variable testString (using multiple replace() functions) BEFORE you attempt to merge everything.  Which is notably worse..

However, there are other use-cases where an alternative approach might apply.

If you attempt to use the addProperty() or updateProperty() Expression Builder functions, then the escaping does work.  You don't have to do anything further to the string.  This means that you can also easily add/modify values within a JSON object after it is initialized.

However, the caveat to this is that variable assignments cannot be self-referential.  Meaning, if you tried to do a SetVariable step for a JSON object, then you couldn't use that same object within an assignment/function inside it.  Since the add/updateProperty functions take the object name as an input:
You wind up getting an error.
To belabor the point, attempting to "Set" the value is actually redundant as the two functions above actually do the assignment for you.

So how do you run these?

The answer: use the Data Operations | Compose step inside the Expression Builder after you do an Initialize Variable step as the example above.

By performing the following functions within two Compose steps...

...inside the Expression Builder (you can't just copy/paste these into the steps themselves)... 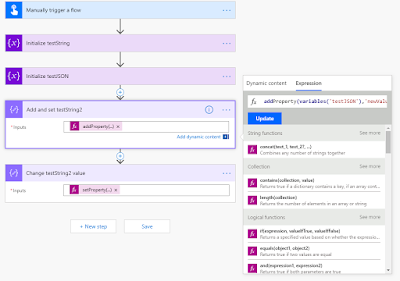 ...you'd get the results included below:

Now, the results do look a little strange because we're actually running the commands (i.e. addProperty() and setProperty()) as a part of the Input so the Input/Output both hold the results of this command.  However, you can see that the new item 'testString2' is added in the first step (using the same value as the original assignment to show escaping works) and then updated to a different value in the 2nd.

It's possible that there exists a simple function to escape a string in a single step, but I haven't come across it yet.  This all seems to happen automatically when directly adding a string to a JSON object.

Because some d-bag is throwing 'bot posts at my blog I've turned on full Moderation. If your comment doesn't show up immediately then that's why.

John Hall
I have had a long career of duct-taping things together to reach a defined result. Sometimes for my employer and sometimes for an investor. This includes entire organizational structures, processes, and market opportunities as well as technology. Least amount of pain for maximum gain. Just start that clock w/ a TRS-80 Model III and sloooowly roll it fwd through the 1980s-Present and you can guess how many rolls of organizational duct-tape I have gone through. While I list my favorite book on my full profile, it is mainly because I was previously directly engaged on a team causing some of these kinds of outcomes. The scope of the damage caused by myself and others like me will be a societal debt I will be paying the interest on for the rest of my days.